Today, we’ll be putting the spotlight on an anime that aired in February of this year. It was made as a love letter to Ashita No Joe but has an identity all its own. It took the anime community by surprise and was a delight for us to watch.

Since you’ve read the title of this post, I’ll just jump straight to the point.

Megalo Box is one of the best shows to come out this year (2018), but it’s mostly been overlooked by the Ashita No Joe fans and not many people are actually talking about it. It certainly seems to fit in the category of a “hidden gem.” But this begs the question… why?

It seems like people were watching, but its quality has been vastly underappreciated by our community. If you went to YouTube and looked it up, no doubt your favorite anime reviewers have covered it, but otherwise people are rather silent.

How can something be so highly regarded by reviewers and yet still have a dismal appreciation from the anime community overall?

Well, if you’re on the fence about giving this new classic anime a try, let this post put your questions to rest.

Here’s why you should watch Megalo Box!

Compared to the many complex stories in the anime universe, Megalo Box’s will sound almost too simple:

A small-time boxer called “Junk Dog” wants to break into the big leagues and has to work his way to the top.

Despite its simplicity, Megalo Box stands strong with this premise. There are so many ways this could have gone wrong, but the show is unapologetic with it and offers several other elements on top of this basic plot.

I’ve never been drawn into a sports anime like this before, and the writing is what makes this show so addictive. It’s a show about futuristic boxing, but it doesn’t rely on the fights to keep you interested. In fact, there are quite a few interesting factors to keep you glued to your seat besides the action:

– The respect between rivals… or lack thereof

– What real boxing is about, and what makes a REAL fighter

– Tech vs raw talent and skill

– The life-threatening stakes at risk if they fail

– What Megalo Boxing means to each fighter, both personally and professionally

There are many things that add to the overall story of Megalo Box, and I wouldn’t dare spoil any of it for you here. But trust me, the elements listed above add so much to this show and make it truly unique from other sports anime.

It’s not just about winning, but fighting for a brighter tomorrow 🙂

Oh my gosh, the characters!

Upon first glance or the first introduction to each character you may be thinking;

“Okay. I’ve seen this before, but whatever. At least the designs are cool.”

Even the fighters that Junk Dog goes against are interesting. The one-offs are good fun, and the episode focused fighters are well developed. You actually start to care about the opposition, or at the very least understand them. This makes the fighting in the show less conventional and always adds something new to the Megalo Boxing match.

Yuri, in particular, is fascinating.  You can call him the villain if you want, but he is first and foremost an antagonist.

“What’s the difference?” I hear you ask. Well, let me tell ya.

A villain is a character with villainous intentions and is the hero’s number one enemy. But an antagonist is more of an obstacle, someone not necessarily evil but still in opposition to the protagonist.

In Yuri’s case, he’s Junk Dog’s main obstacle. The guy standing at the top that he needs to face… and in my opinion, the most interesting character in the show.

And trust me, every character in this anime is interesting!

You learn about their backgrounds, characteristics and make you want to see more from them. I can’t say too much, otherwise, we’d be getting into spoiler territory, but these characters truly make Megalo Box great.

Jump on in and see for yourself. You won’t regret it 🙂

The last time I got so hyped by a show’s music alone was the first season of Attack on Titan. This soundtrack is truly a treat and more than deserves a section on this list.

Anyone who’s seen the show will tell you it’s like a mix of Cowboy Bebop and Samurai Champloo. The music by Aimer (エメ) has a fresh and unique sound and one track, in particular, will never fail to get you hyped!

Here, just give it a try and you’ll hear for yourself 🙂

Now, imagine this playing at just the right moments, the moments that make you want to stand up and cheer. This music is truly something to behold and when it’s paired with the story, characters, and animation, you too will feel the insane hype this show creates! 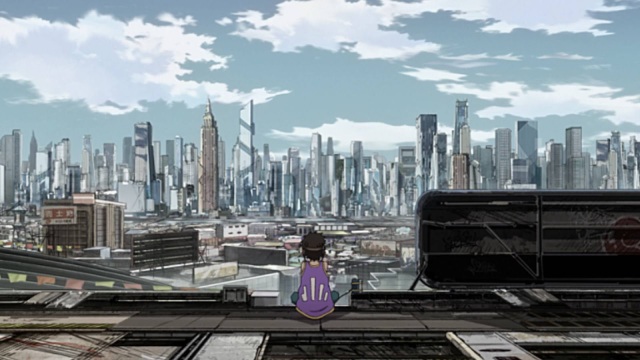 Do you know the main difference between Star Wars and almost every old sci-fi film and show?

If you’re uncultured, this may not be an easy thing to answer. But for those of us who’ve watched media from different times, old and new, know.

Think about it for a second. The ships, the planets, the costumes, practically everything in (the OG) Star Wars felt lived in, dirty and grimy. One of the main things you could expect from a sci-fi film is a sense of cleanliness as if this futuristic environment had learned how to keep every spec of dirt off those bleached white walls.

While this may be aesthetically pleasing for some, there’s something about seeing dirt and age in a film’s environment. It makes it feel more… real. Star Wars felt like a real universe where people lived, and this was one of many reasons it stood out at the time.

This is the same reason it adds to Megalo Box’s atmosphere. Too many anime in recent years have been animated completely ‘dirt’ free and thus feels more cartoony. This isn’t necessarily a bad thing, but just like the sci-fi films of old, sometimes we get tired of clean and hunger for a world that looks lived in.

This grit style is also reminiscent of anime from the 90’s, which garners a nostalgic appreciation from fans of the older shows. The 90’s style doesn’t even hold it back. If you watch any episode you can see how much care and effort went into it.

The animation may not be as clean, but that doesn’t detract from how amazing it looks!

Megalo Box is a great show with good characters, excellent animation, and unique music. Is it perfect? No, but nothing really is. One thing’s for sure, this show is worth a watch… or a binge marathon, depending on how enthusiastic you get X)

Then this show is right up your alley!

Thank you so much for reading!

Have you seen Megalo Box? Are you going to give it a chance? What do you think makes this show special?

Tell me what you think in the comments 🙂

[Originally posted for a client on “Anime and Manga Life”]